I don't why, but these days was like that every single moment I spent was entirely dedicated to Resident Evil.

I can't wait to the RE5 demo coming online on the XBox Live (already available in Japan, but, unless you have a japanese GOLD account, you're screwed). Resident Evil Degeneration is finally available on DVD (or watchable somewhere in the underground internet zone).Damn, this game is like a drug for me... I should do something to cure myself, like ... doing some nasty FanArts !!! (with an extra bonus : a 3D version !!! - of course you'll need some special glasses)

Here it is :
Regular version : 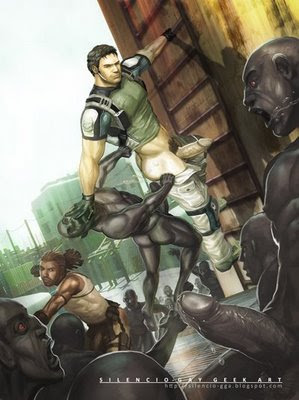 If you didn't notice, this is a Resident Evil 5 Fan Art. You can see Chris Redfield climbing up a ladder, and next to him Shevan, the male version of Sheva :D .

About RE Degeneration (if my humble opinion interests you):

As I understood, the story takes place just before RE4 (The new parasite is not mentionned). After the Racoon City destruction, the case becomes public. As a consequence, Umbrella collapse, and finally is shut down. At the same time, bioterrorism is raising up. A new organisation, Terra Save, tries to control the WilPharma activities, and the experiences made on human subjects for a new vaccine. But the plague will soon start again, when an infected WilPharma employee is found sick in an airplane, resulting in a spectacular aircrash. The Virus T is back.

This CGI movie is a little bit disappointing. Story is too confusing, and most important, it doesn't look like a survival movie, but more like a Sci Fi one... But it's always a pleasure to see Leon Kennedy (as seen on RE4) again. Claire Redfield and all female characters look like "botoxed" barbie dolls... (maybe the weirdest creatures in that movie).
This film is really made for fans, and reminds a little bit of what Square did with FF Advent Children. Some flaws are similar : too much "fan service", story that could confuse or even bore viewers who don't know the RE saga... (my boyfriend slept during the film)... A little bit less of RE, and a little more of real zombie movie wouldn't hurt...

Anyway, Re Degeneration deserve a watch, more than the live action adaptation.

(oh, by the way, I need a French/English translator, or someone who can correct my poor grammar...thanks)
6 commentaires: