Japan Expo is just a bunch of homophobic otakus.

I'm just totally chocked and  upset. Japan Expo asked Fabrissou to change his poster because "some people" complained about it... "Japan Expo has to be a mainstream convention for all the family and stuff...blahblahblah""

Well, then, how can they justified "prestigious" guests appearances such as "Katsumi" or "Nana Umi". 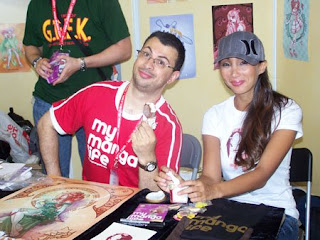 To the people who complained about the amazing poster : "Go fuck yourself (apparently you need it), and let Fabrissou enjoy the convention"

I actually understand where they're coming from per se.

When I went to Anime Expo people loved to complain about stuff, and generally if whatever it was couldn't be hidden it had to be taken down or if it was a person they had to leave, even though nobody was inappropriate.

That doesn't make it RIGHT in this case because the guy in the pic IS covered up and if he was in a swimsuit he'd be showing just as much skin.

How big was the poster? If it was some HUGE banner then I understand, usually its against the rules, but if it was the size of a sheet of paper then that's just discrimination.

Uggghhh, i was shocked with the mouse pad with boobs xDDDDD

Mmmmm somehow i am not surprised, this is sad but its very obious that male sexynes is restricted u_u

That Fabrissou poster is soo awesome *_*

Were the managers of the expo Japanese? If so, then maybe it's a cultural issue. The Japanese, though notorious for pornography, still subscribe to a certain degree of censorship. For one, pubic hair was once deemed obscene and unpublishable.

well, the managers are french, and it is a french convention. W don't have such taboos as pubic hairs, here..; Bur France is more and more conservative and homophobic...

That is ridiculous behaviour, my friend. I'm sorry that happened to you!